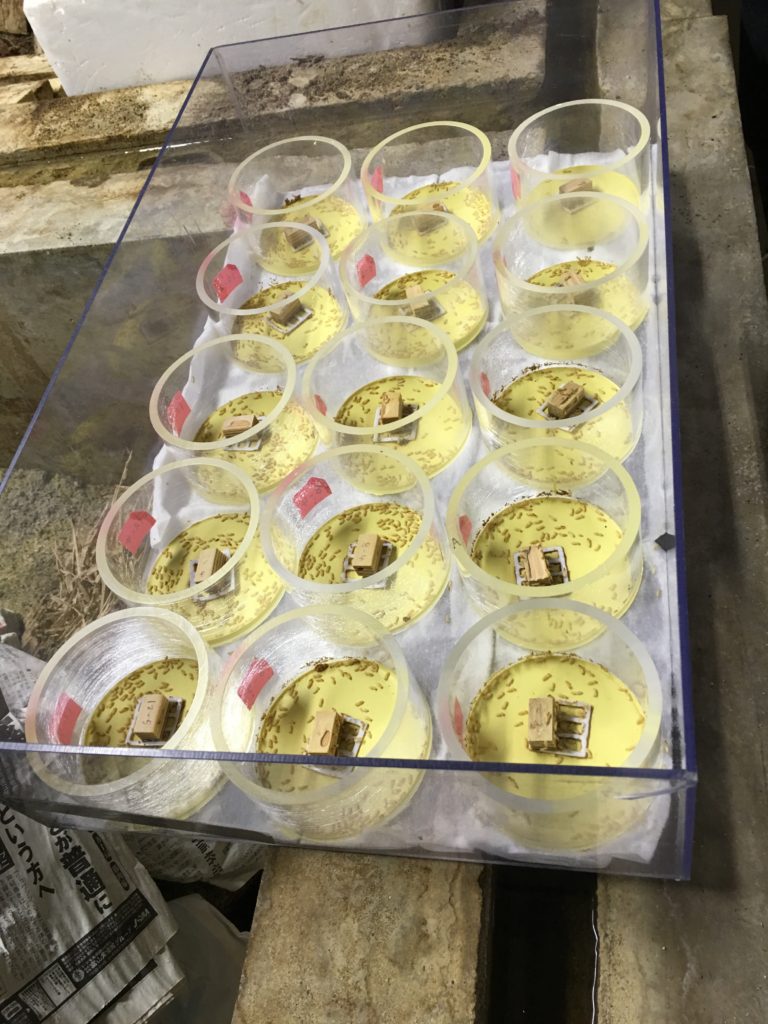 Soufa manufactured and sold by our company is also effective against American termites.
Under the guidance of Professor Yoshimura, Kyoto University, a technical adviser, we conduct tests that conform to JIS standards and confirm the effects.

There are certain rules for exams and they are conducted according to the method.

To be honest, it’s a bit uncomfortable … Apply 110 g of chemical solution around the square meter to the specimen. This test is to determine the presence or absence of food damage by measuring the weight of the test specimen after the test.

When building a wooden house in Japan, the Building Standards Law is applied. According to the law, termite control is performed 1m from the ground.
It originates from the Japanese native termites and the termites living on the ground. Termites are supposed to invade from the ground. However, in actual termite damage, beams are also affected, and it is a fact that there are many skeptical opinions as to whether the effect is appropriate even if only 1m is treated.
In addition, although it is supposed that termite control is not required for some species, termite damage has been reported in other literature and on-site.

What is troublesome is that in addition to native species, there are also exotic American Kansai termites living in Japan.
It is not yet known whether the American termite is capable of breeding on its own, but it has been confirmed at least throughout Japan and there has been no report that the damage has ended.
There are few reports of damage to the American termites, as their perception is weak. Therefore, it seems that there are few vendors who can actually respond to the response late.

The Building Standards Law does not assume the American Kansai termite. So 1m from the ground will be less effective for American termites.
In many cases, the route of intrusion is to adhere to imported furniture, etc., so it is desirable to apply termite-control agents to the entire structure.

If you look on the net, other than our company, it is Eco Powder Company and Nippon Borate.

Although some literature on the damage of Kansai termites has been published on the Internet, it seems that there is no clear knowledge about its countermeasures or eradication.
Researchers may recognize that boric acid is effective against the termite termite, but there is no mention of why.
We hope that boric acid termiticides will spread in various forms in the future.

As a flame retarder for cellulos…